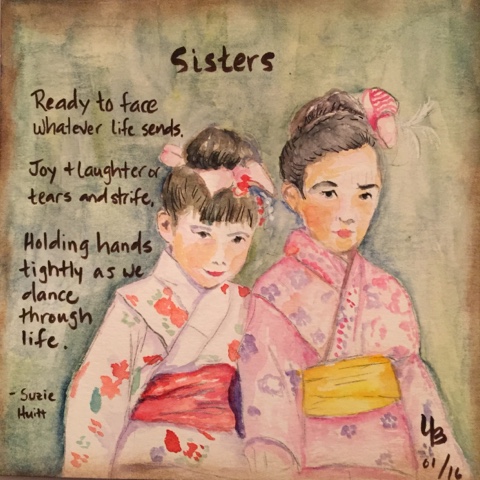 Today is my little sister's birthday!! Happy Birthday, Muts! (Pronounced moots, for Mutsumi) If you noticed the date on the art, you'd know that I painted this last weekend. That's because I wanted to send the card to my sister for her birthday.
My sister and I are very close. In fact, she's my best friend...someone I confide in, laugh or cry with. There aren't many pictures of us together because we weren't together until she was 8 and I was 12.
My parents divorced when I was 4 and my sister was a few months old. My father took my sister and I stayed with mom. I did get to visit my sister but she was never allowed to spend time with us at mom's. Mom tried through the legal system but as a single mom, it was difficult to convince the judge that my sister was better off living with us than my dad and his new wife.
My mother remarried to an American soldier and about a year before my dad (I've always called my stepdad, dad) was transferred back to the states, we found out that my sister was living with her aunt. My biological father had divorced and no one wanted to take care of my sister so she was sent to his sister. Once we found out, we finally got the custody. It was hard at first. She didn't really know mom and dad didn't speak Japanese. And for a few years, she clung to me.
My dad had adopted me before we left Okinawa and did the same with my sister. She went to the American school on the base but she spoke no English. It was a tough adjustment for her.
I remember at the end of the school year, I was to attend a week long camp to a neighboring island with the 5th grade class. My sister begged me not to go, but my parents though I should go. When I boarded the ship, I could see my sister hysterically crying. It was probably the hardest thing I had to do. Mom told me later that my sister didn't go to school the first two days but was fine enough to go to school on the third day. It also gave mom and dad and Muts to get to know each other.
I think because of the past, we are very close. My kids can't believe that my sister and never fought. It's not that we didn't annoy each other, it was that it never was important enough to "win." For the longest time, she was my shadow, always wanting to hang out with me. And it was in middle school that she began to really hang out with her own friends. It was a little sad for me, knowing that she had others that she could rely on. 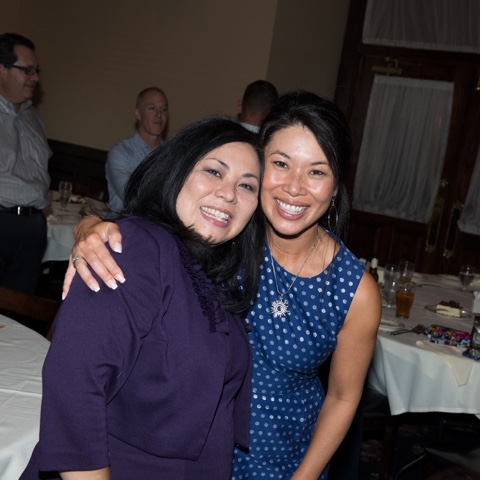 Muts is a beautiful person inside and out. The quote I found is meaning for so many reasons. We've been through so much, but we've gotten through them all together. And even today, we still hold hands when we are together. I'm sharing a little bit of our story for my kids to read at some point. 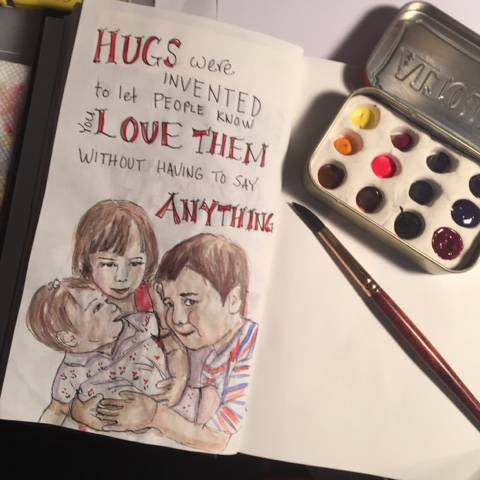 Yesterday, I drew my kids hugging as this was probably the last time they all hugged each other. Lol. And though they fight all the time, I know that they confide in each other. I hope that as they get older, they will support each other and be there for one another.
Posted by Kari at 7:19 AM