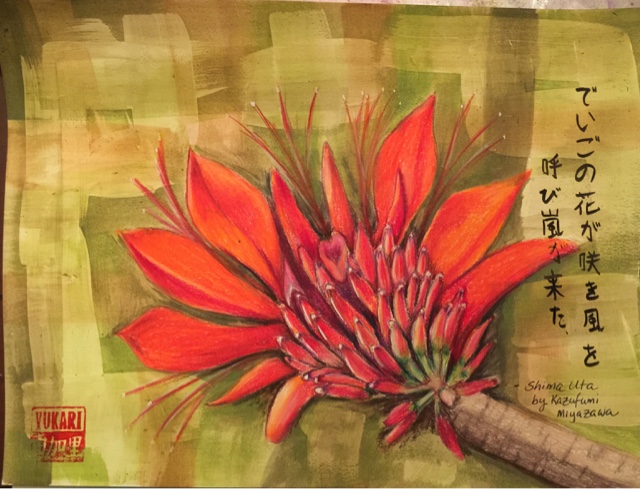 Over the weekend, I went on a journey. I didn't leave the house but the journey took me back in time, helped me remember my past, and helped me learn something new along the way.
It started in my daily journal on Friday. I was to sketch a memory. So I sketched a  woman in a traditional Okinawan kimono and hat. 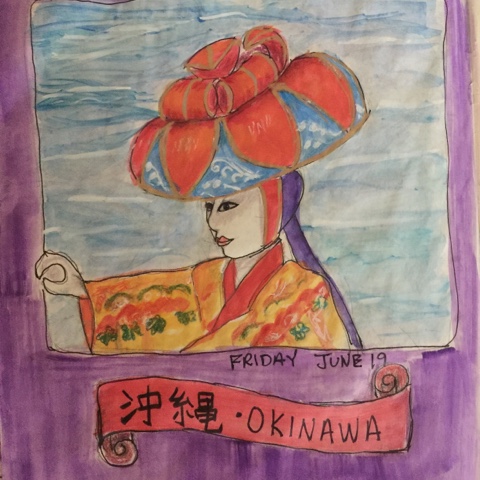 I've always loved the hat (hanagasa). It resembles a large red flower like the hibiscus which you find everywhere in Okinawa. The white waves in the blue background represent the ocean. Growing up, we had a small hanagasa that I used to play with. I asked my mother what happened to it and she said it was destroyed during the move from Okinawa to the States.
Once I did that simple drawing, I wanted to draw the deigo flower (tiger's claw), which is the official Okinawan flower. My mother was a seamstress and a crafter (not a surprise where I get my love of creating) and she once made a deigo flower out of felt and colored tape. 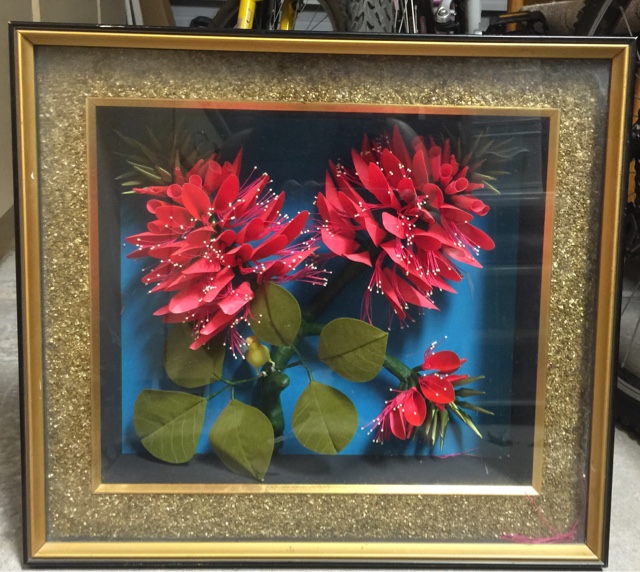 Thinking about the deigo flower made me think of a song. I only remembered the first half of the first line. But I clearly remembered the melody. And thank you, Google, for helping locate the song on YouTube, which I will share. The puzzling thing was that this song was written in the 1990's, decades after I left Okinawa. How was it possible that I knew this song? Talking to my mother was not much help. She didn't remember sharing this song with me. She owns many DVD's that she made or her friends have made of Japanese TV programming and it's possible that I saw one of them that had this song. The other possibility was that this song was written using one of Okinawan traditional songs. So once again, I turned to Google. This time, Google didn't help me come up with an answer but it led me to another song, a traditional Okinawan song that I'm sure I learned as a child. By Friday night, I had listened to several versions of the song about the deigo flower and read about it's origin and it's interpretation.
This song is called Shima Uta, which means Island Song. It was written by Kazufumi Miyazawa, the lead singer of the band The Boom. The members of The Boom are all mainland Jaoanese but Mr Miyazawa was so struck by the island and its music and also by the stories of war survivors that he wrote Shima Uta. It is a beautiful song that combines the unique Okinawan sound and the modern rock sound. You can listen to The Boom version here   The version I chose to share with you is one done by a JPop star, Gackt, who was born in Okinawa. And this version is sang in Okinawan, rather than the original Japanese sang by the Boom. There is an Okinawan version by the Boom but Mr Miyazawa's Okinawan sounded Japanese to me. The other reason why I chose Gackt's version is that it features another Okinawan favorite in the beginning and the older gentleman playing the sanshin (the three string instrument) and his Okinawan intonation was familiar to me. And the way the women sing at the beginning is how the traditional Okinawan songs are sung. And if you aren't a fantastic singer and you sing in that way, it can be quite overwhelming (sorry mom).
Here is the translation of the song.
The Deigo flowers bloom, calling the wind, the storm is here

The Deigos bloom profusely, calling the wind, the storm is here
Over and over the sadness crosses the island like the waves
In the forests of sugarcane we meet
Under the sugarcane we say goodbye for a long time

The Deigo flowers scatter, just swaying with the rippling waves
A meager happiness is an ephemeral flower on the waves
In the forests of sugarcane you sang, my friend
Under the sugarcane we part for eternity

It's a beautiful song. But for me, it takes on a special meaning when I think about the war survivors like my mother and her family. I spoke about it here  It was heartbreaking to read about the Battle of Okinawa in which nearly 150,000 civilians died, mainly by suicide. The war always has casualty on both sides. But in this case, I don't know who did more harm to the Okinawans, the U.S. Troops or the Japanese, who considered Okinawa dispensable.
After the war, many survivors left the island, looking for work. And for the thousands of diaspora Okinawans, the next song makes you miss the island, the warm climate, and even warmer people. The song is called Tinsagu Nu Hana and it's about the lessons you learn from your parents. But for me, it also means learning from the history of your people. This time I used a version sung by the Boom and an Okinawan singer. I like it that it combines the traditional with the new. Here is the English translation.

There's no point in possessing magnificent jewelry if you don't maintain it;
people who maintain their bodies will live life wonderfully.
The desires of the person who lives sincerely will always run true
and as a result she will prosper.
You can do anything if you try,
but you can't if you don't.

I spent Saturday and Sunday looking through some of my photos from Okinawa and I kept going back to the videos. I'm glad I went on this journey and I'm determined to learn more about my home. Here are some photos.
My second cousin and me (in kimono) 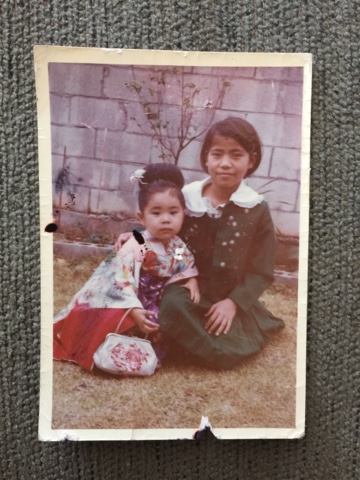 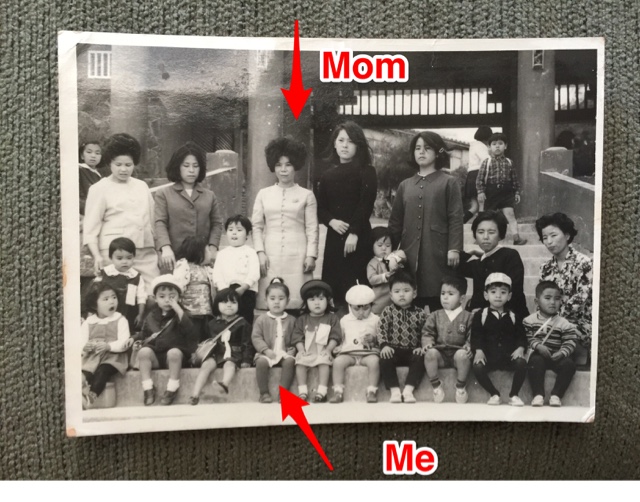 This is the only photo I have of my biological father. 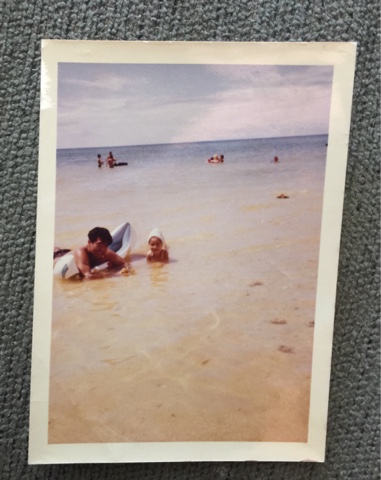 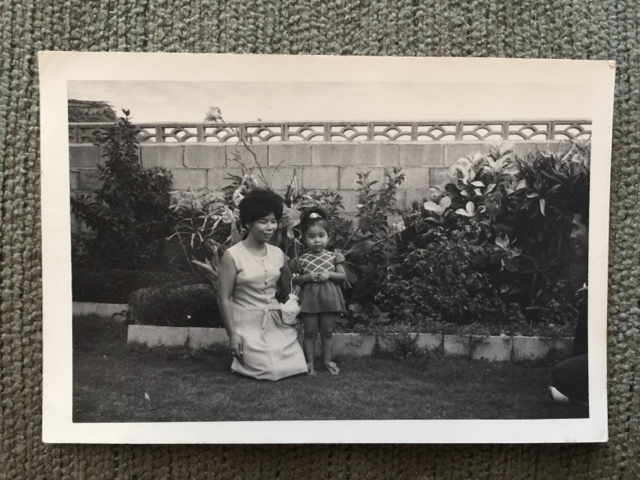 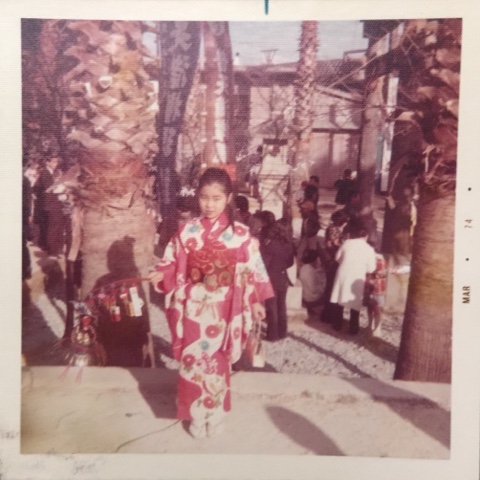 I wondered if you noticed that I was carrying a purse in many of these pictures. How cute!
Ok, so back to my art. The deigo flower was done in colored pencils. The background was done with Inktense blocks. I wrote the first line of the song, Shima Uta in Japanese (it's embarrassingly awful but I haven't really written Japanese in decades). The stamp you see at the bottom left is a stamp made in Japan (my husband had that made for me when he traveled to Japan for work). I hope you are still with me. The journey was bittersweet. I hope I didn't bore you too much with the details about the songs. I wanted to preserve my thoughts for my children. They probably won't read this now but maybe someday they will understand their heritage a little better.
Posted by Kari at 9:02 PM

Email ThisBlogThis!Share to TwitterShare to FacebookShare to Pinterest
Labels: Okinawa